Dealing with the "Too many dependencies" problem

Earlier I asked whether people thought the issue of passing in too many dependencies into a class was an actual problem. This was in response to another post I did about test smells. A few people had asked me how the problem of a controller having way too many dependencies should be solved. My response to them was to apply Single Responsibility Principle, which is pretty much what others also said.

Here is the problem: 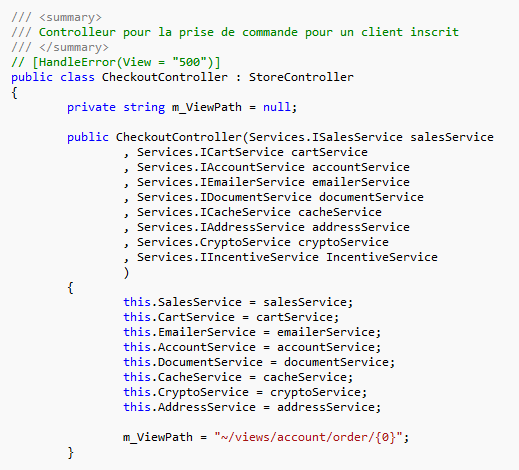 In this case it is a controller, but it can well be any other type of class.

Why is this a problem? After all, we are applying Dependency Injection.

What we are not doing is automagically making our code clean and sustainable.

The more dependencies our class takes in, the higher its efferent coupling to other classes, meaning that it knows a little bit too much. If it knows too much, it is  most likely because it is also doing too much. The class is no longer focused on one thing, and as a consequence we are creating somewhat brittle software that is too tightly coupled, even if we are passing in our dependencies, even if we are not using new anymore.

How did we get here?

We all agree that DI is good and so is Composition over Inheritance. And this causes us to end up with classes that act as coordinators or require information or perform actions on these different classes. Other times we end up here because of:

Often, frameworks impose restrictions that take us down the wrong path. Such is the case of ASP.NET MVC when using the default routing conventions. We mostly encapsulate functionality under a specific controller because the routing suites us. In other words, from a user’s perspective it makes sense to have many things under the /checkout/{action} path, even if that leads us to bloated controllers that take many dependencies which have little to do with each other.

XYZService or XYZManager named classes are yet another example of ending up with too many dependencies. When we start to encapsulate everything under a service or manager, we find that despite some of the dependencies only being used by one or two methods, still have to be passed in.

First and foremost, and despite it being beaten to death, we need to apply Single Responsibility Principle. I've written in the past techniques that have often helped me accomplish this. Taking this into account, there's also a series of Do's and Don'ts that can help:

What you can do

What you shouldn't do

These are just some simple guidelines. They are not set in stone.

Finally, while writing the initial post, I came up with an idea of writing a ReSharper plugin that could help detect classes that have too many dependencies. The result is the InjectionHappy Detector. Once installed, it gives you a warning if it finds a constructor taking in too many interfaces. This number by default is 3 (just some random value, you can change it yourself under Options). It's a very simple plugin and not full-proof. More of an experiment. You're free to fork it and enhance it anyway you wish.