It’s not about the slides

First and foremost - a talk isn’t about slides. The slides are there to help. They’re not the centerpiece of your talk. If you’re revolving your entire presentation around how awesome your slides are, then just post them online and save yourself the trouble of giving a talk.

Having said that, there are some things that can help and other things you should generally avoid when preparing slides.

Each of us have our favourite tool for preparing slides. Mine is Keynote. Choose what you’re comfortable with and use it. But please, please, don’t roll your own. The only time it would make sense to roll your own presentation tool is if you’re giving a talk about how to create a presentation tool and instead of the demo you surprise people by saying “Well, I’ve been using it all along”.

Otherwise, the only good thing about rolling your own is to brush your own ego.

Don’t put too much text on a slide. If you have enough text on a slide that will entice people to read your slide, you’ve lost the audience. They’re now focusing on the text as opposed to you. And by the time they come back to you, you’re ahead so now they’re completely lost.

So you might ask how much text should I put on a slide? Essentially what you want to avoid is people taking more than a second or two to read what’s on your slide. And when we cover bullet points shortly, this is something important to remember.

What I often have on slides is just single sentences of 4-5 words at most, or a single word, highlighting a point I want to make. That word or phrase is also a self-reminder of what it is I want to cover at that point in the talk.

I’m sure you’ve all read some variation of “Death by PowerPoint” or “Death by Bullet Points”, with the general notion that you shouldn’t do slides full of bullet points. I tend to agree. However, bullet points are also valuable if used efficiently.

When I use bullet-points, I try and always make sure that 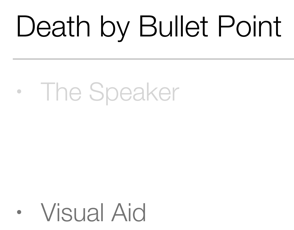 Keep it to the absolute bare minimum. I usually avoid slide transitions, and in terms of animations, I only use “Disolve” or “Appear”. Please do not go overboard with animations. It’s annoying as hell. If you want that, you might as well use something like Prezi (which is not my cup of tea and makes me really dizzy as a spectator).

“An image is worth a thousand words”. Yes. True. Unless every other bloody slide is an image. Because then it’s worth squat!

The whole point of using an image is to use it to help people identify something with an important point you want to make. If every point you’re making is an image, how do you expect people to remember every single image? Use it as an impact. Don’t flood your presentation with images.

Regarding animated GIFS, don’t even get me started on that. Sorry, maybe I’m just too old for this, but much like Prezi, it’s not my cup of tea. Or coffee!

When using images, a few useful resources and tools:

One technique people often use, and Jake Wharton is great at doing this, is use the “Magic Move” transition in Keynote to provide highlighting on specific areas of code in a slide. Results are fantastic, but every time I’ve tried it….way too much work!

Really up to you what slide template you want to use, but a few things I generally stay away from

I don’t use them. I find that if I have to squat to read the notes or what’s worse, read a script, then

As I mentioned earlier on, often I use a few words on the slide to remind me what I have to speak about. And that’s generally enough without the need for scripting.

If during your talk you need to refer back to a slide, don’t start navigating back and forth. Repeat that slide in a certain position. It feels much more natural and doesn’t make people dizzy while you’re trying to find exactly where you put it.

Of course you don’t have to make a verbatim copy of it. You can modify some of the contents to add more context for the position in which it appears again. The main point however is that it’s OK to repeat slides to rehash or refer to content covered already.

Generally you should be prepared to give a talk without slides. It’s not easy but at times it may be necessary. A few months ago in fact this exactly happened to me. I was giving a presentation to a smaller group of people (fortunately it was only around 30), and the electricity went, meaning no projector. I didn’t have any notes on papers, but I essentially ended up giving a talk without really using any slides.

Live coding/demos instead of Slides

If you’re giving a technical talk which may involve code, you could always try and go for using your favourite IDE or Editor and do the entire thing in that. Once again, Venkat is a master at this. And it’s not easy.

My general recommendation (which unfortunately I don’t follow myself) is to try and avoid live coding unless you really want to or need to; in which case, make sure you practice enough. And if you think a shortcut to this is to copy/paste or have a series of predefined templates you can spit out, then please, avoid it. Nobody enjoys seeing how awesome you are at copying/pasting!

One thing we left out is the number of slides you should have per talk, but that is actually related to timing (or not?), which I’ll cover in another post.